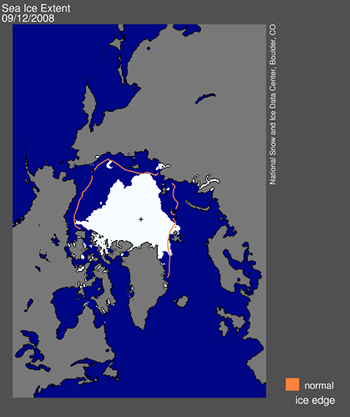 NASA released data today showing the extent the arctic sea ice, located over the North Pole, had diminished due to rising global temperatures. The decline in sea ice is the largest since satellites were first used to monitor thec conditions of the worlds ice packs over 20 years ago.

National Snow and Ice Data Center: “On September 12, 2008 sea ice extent dropped to 4.52 million square kilometers (1.74 million square miles). This appears to have been the lowest point of the year, as sea has now begun its annual cycle of growth in response to autumn cooling.